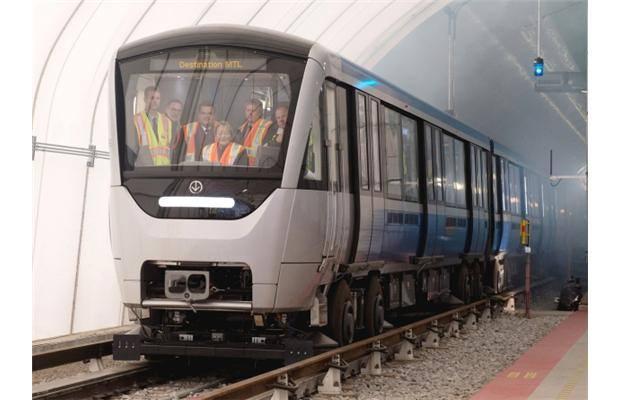 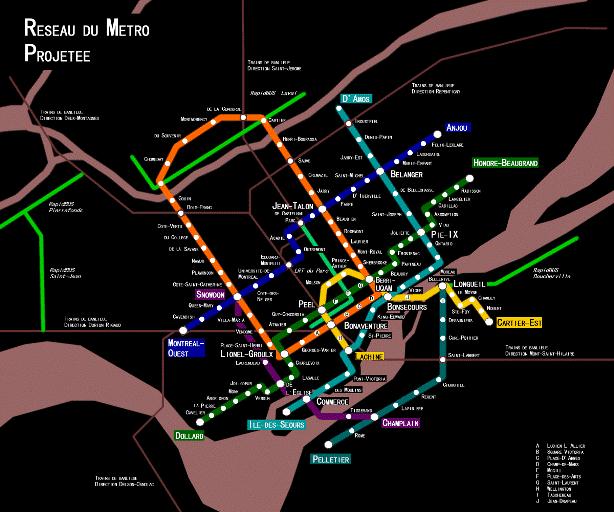 MONTREAL — 2014 promises to be a big year for transit in Montreal. Shiny new métro cars are on the way, the first since the 1970s. A sixth commuter train line is to open, the first addition to the network in 14 years. Another first: passengers will be able to use their cellphones in downtown subway stations and tunnels. Here’s what to expect on buses, trains and the subway in the new year.

Early in 2014, the first of 468 new Bombardier/Alstom métro cars are to arrive in Montreal for testing. By the fall, the STM says the first nine-car train should be in service. The cars will give lucky riders of the Orange Line more elbow room. They will increase capacity by eight per cent, largely because of their open-concept design, which allows passengers to walk from one end to the other. The doors are wider, the windows bigger, the seats more comfortable and the interior brighter. There is no air conditioning, but the STM says better ventilation should improve comfort in the summer. If all goes according to plan, by late 2014 the STM will be receiving one nine-car train set per month. All of the 468 cars are expected by 2018.

Some métro users will have to look for alternatives in 2014. The Yellow Line — which runs between Longueuil on the South Shore and the Berri-UQAM station in downtown Montreal — will be completely closed on 25 weekends so repairs can be made to the subway tunnel, including the section under the St-Lawrence River. It will be shut on weekends between March 8 and May 25 and between Sept. 13 and Dec. 14. To help stranded passengers, the STM will be putting three bus routes in place.

In 2014, commuters will be able to use their cellphones in the métro if they’re in the right station. The required equipment will be installed on two downtown subway stretches: on the Green Line between Atwater and Beaudry, and on the Orange Line, between Mont-Royal and Bonaventure. Bell, Rogers, Telus and Videotron are working on the project.

Several new bus lanes are planned in 2014. One is expected to go on Sherbrooke St. W. in Notre-Dame-de-Grâce to encourage transit use during the two-year closure of St-Jacques St. in the spring for work related to the new Turcot Interchange. Also on the list for 2014 are lanes on Cavendish Blvd. (in St-Laurent, Côte-St-Luc and N.D.G.), Grenet St., Côte-St-Luc Rd. and Viau St. The city of Côte-St-Luc has vowed to block the introduction of bus lanes on its territory.

The STM will start work on its $200-million iBus project. Among other things, it involves installing GPS, display screens and audio equipment on all of its 1,700 buses over two years. Thanks to the equipment, passengers at bus stops will be able to track buses via smartphones. At métro stations and busy stops, screens will provide real-time bus data. On board, the next stop will be announced and flashed on the screen. “At the end of 2014, if all the tests planned for the spring go well, the system will start gradually being deployed in certain buses,” an STM spokesperson said. The $200-million price tag includes a radiocommunication system for drivers.

Elevators will be put into service at the Champ-de-Mars and Jean-Talon stations. Seven stations have elevators: Berri-UQAM, Cartier, Côte-Vertu, De la Concorde, Henri-Bourassa, Lionel-Groulx and Montmorency.

All métro stations get display screens

By the end of 2014, all 68 subway stations will have digital screens that display departure times of the next two trains, as well as news and advertising. Typically there are four screens per station, two on each platform. Most stations are already outfitted. Screens are to be installed at the remaining 22 stations in 2014.

Known as the Train de l’Est, a new commuter train is scheduled to launch in the fall of 2014, between Mascouche and downtown Montreal. Late and over-budget, the $671-million, 52-kilometre line will feature 13 stations, including three shared with the Deux-Montagnes line. There are to be 16 departures per day, mostly at rush hour. The AMT predicts it will carry about 11,000 passengers daily. It will take about an hour for Mascouche residents to reach downtown Montreal. It’s the first new commuter train since the Mont-St-Hilaire line was revived in 2000.

Two years later than originally planned, Deux-Montagnes — the AMT’s busiest and most-overcrowded line — is expected to finally get double-decker train cars. The new, higher-capacity cars will give riders some breathing room and a better chance at a seat. In 2014, the AMT also expects to finalize the purchase of the Deux-Montagnes line from Canadian National, which will give it more flexibility to add departures.

The AMT will launch five parking pilot projects at train stations and bus terminals. The aim is to raise revenue, encourage more people to walk, cycle or take the bus to stations and terminals and relieve packed parking lots. One option being considered is charging for use of reserved spots closest to train platforms or bus stops. Pricing and locations have not been announced yet. In Toronto, GO Transit charges passengers $80 per month for reserved parking in some of its lots.

Quebec has set aside $84 million for the addition of 208 kilometres of reserved bus lanes over the next few years in the Montreal region. The AMT administers ones that are off-island, on highways or shared by multiple transit authorities. A new dedicated bus lane on eastbound Highway 20 in Lachine will open in 2014. The AMT says more are on the way but locations are not yet available.

The AMT plans to open a ninth station on the Candiac line. To be known as Lachine-Victoria, it will be near Victoria St. and St-Joseph Blvd. in Lachine. The station is being added as part of an effort to encourage drivers to take transit during work on the Turcot Interchange.

As a pilot project, the AMT plans to have employees on commuter trains answering passenger questions and providing other assistance (telling people which cars have available seats, for example). The project will begin on the Mascouche train and is to gradually be introduced to other lines, the AMT says.

The train authority will completely revamp its website to make it easier for commuters to find the information they need. The new site, which will feature a trip planner, is scheduled to be launched in the spring, with a preliminary version  available in February or March