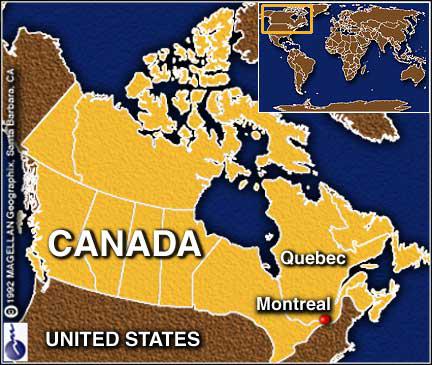 Quebec is one of Canada’s provinces located in east-central Canada. It is the only Canadian province that has a predominantly French-speaking population, and the only one to have French as its sole provincial official language.

Quebec is Canada's largest province by area and its second-largest administrative division with total area of 1.540.687 km2. It is bordered to the west by the province of Ontario, James Bay and Hudson Bay, to the north by Hudson Strait and Ungava Bay, to the east by the Gulf of Saint Lawrence and the province of Newfoundland and Labrador. It is bordered on the south by the province of New Brunswick and the US states of Maine, New Hampshire, Vermont, and New York. It also shares maritime borders with Nunavut, Prince Edward Island, and Nova Scotia.

The name "Québec", which comes from the Algonquin word kébec meaning "where the river narrows", originally referred to the area around Quebec City where the Saint Lawrence River narrows to a cliff-lined gap.

Quebec City is the capital of the Canadian province of Quebec. In 2011 the city had a population of 516,622 (48.2% were male and 51.8% were female) and the metropolitan area had a population of 765,706 making it the second most populous city in Quebec after Montreal, which is about 233 km to the southwest. According to the Statistics Canada website, 94.55% of Quebec City's population speaks French as their mother tongue. In addition, more than a third of city residents can speak both French and English.

Located in the eastern part of Canada and part of Central Canada, Quebec occupies a territory nearly three times the size of France or Texas, most of which is very sparsely populated. Its topography is very different from one region to another due to the varying composition of the ground, the climate (latitude and altitude) and the proximity to water. The Saint Lawrence Lowland (south) and the Canadian Shield (north) are the two main topographic regions and are radically different.

Quebec has one of the world's largest reserves of fresh water, occupying 12% of its surface. It has 3% of the world's renewable fresh water, whereas it has only 0.1% of its population. More than half a million lakes, including 30 with an area greater than 250 square kilometers (97 sq. mi), and 4,500 rivers pour their torrents into the Atlantic Ocean, through the Gulf of Saint Lawrence and the Arctic Ocean, by James, Hudson and Ungava bays.

Montreal is a city in the Canadian province of Quebec. It is the largest city in the province, the second-largest in Canada and the 9th-largest in North America. In 2011 the city had a population of 1,649,519. Montreal's metropolitan area (land area 4,259 km2) had a population of 3,824,221 and a population of 1,886,481 in the urban agglomeration. French is the city's official language and is the language spoken at home by 56.9% of the population of the city, followed by English at 18.6% and 19.8% other languages. It is in the southwest of the province of Quebec. The city covers most of the Island of Montreal at the confluence of the Saint Lawrence and Ottawa Rivers. Montreal is defined by its location between the Saint Lawrence River to its south and the Rivière des Prairies to its north.

The four seasons in Quebec are spring; summer, autumn and winter, with conditions differing by region. It has three main climate regions. Southern and western Quebec, including most of the major population centers, have a humid continental climate with four distinct seasons having warm to occasionally hot and humid summers and often very cold and snowy winters. The main climatic influences are from western and northern Canada and move eastward, and from the southern and central United States that move northward. Because of the influence of both storm systems from the core of North America and the Atlantic Ocean, precipitation is abundant throughout the year, with most areas receiving more than 1,000 millimeters of precipitation, including over 300 centimeters of snow in many areas. During the summer, severe weather patterns (such as tornadoes and severe thunderstorms) occur occasionally. Most of central Quebec has a subarctic climate. Winters are long, very cold, and snowy, and among the coldest in eastern Canada, while summers are warm but very short due to the higher latitude and the greater influence of Arctic air masses. Precipitation is also somewhat less than farther south, except at some of the higher elevations. The northern regions of Quebec have an arctic climate, with very cold winters and short, much cooler summers. The primary influences in this region are the Arctic Ocean currents (such as the Labrador Current) and continental air masses from the High Arctic.

Quebec is divided into four climatic zones: arctic, subarctic, humid continental and East maritime. From south to north, average temperatures range in summer between 25 and 5 °C and, in winter, between −10 and −25 °C. In periods of intense heat and cold, temperatures can reach 35 °C in the summer and −40 °C during the Quebec winter, they may vary depending on the Humidex or Wind chill.

Montreal, as the largest city in the province, lies in the hot-summer humid continental climate zone due to the mean temperature in July being just above 22 °C. Summers are on the whole humid, during the day ranging from warm to hot, with a daily average of 26 to 27 °C in July. Winter usually brings cold, snowy, windy, and, at times, icy weather, with a daily average ranging from −9 to −10.5 °C in January. Usually, snow covering all bare ground lasts on average from the first or second week of December until the last week of March. Spring and fall are pleasantly mild but prone to drastic temperature changes; spring even more so than fall.

The economy of Quebec is ranked the 37th largest economy in the world just behind Greece and 28th for the gross domestic product (GDP) per capita. The economy of Quebec represents 20.36% of the total GDP of Canada. Like most industrialized countries, the economy of Quebec is based mainly on the services sector. Quebec's economy has traditionally been fuelled by abundant natural resources, a well-developed infrastructure, and average productivity.

Quebec is a major player in several leading-edge industries including aerospace, information technologies and software and multimedia. Approximately 60% of the production of the Canadian aerospace industry is from Quebec, where sales totalled C$12.4 billion in 2009. Approximately 180,000 Quebeckers are currently working in different field of information technology. Approximately 52% of Canadian companies in these sectors are based in Quebec, mainly in Montreal and Quebec City. There are currently approximately 115 telecommunications companies established in the province. About 60,000 people currently working in computer software development. Approximately 12,900 people working in over 110 companies such as IBM, CMC, and Matrox. The multimedia sector is also dominated by the province of Quebec.

The mining industry accounted for approximately 6.3% of Quebec's GDP. It employs approximately 50,000 people in 158 different companies. The pulp and paper industries generate annual shipments valued at more than $14 billion. The forest products industry ranks second in exports, with shipments valued at almost $11 billion. It is also the main, and in some circumstances only, source of manufacturing activity in more than 250 municipalities in the province. The forest industry has slowed in recent years because of the softwood lumber dispute. This industry employs 68,000 people in several regions of Quebec. This industry accounted for 3.1% of Quebec's GDP. Agri-food industry plays an important role in the economy of Quebec. It accounts for 8% of the Quebec's GDP and generate $19.2 billion. This industry generated 487,000 jobs in agriculture, fisheries, manufacturing of food, beverages and tobacco and food distribution.

Montreal has the second-largest economy of Canadian cities based on GDP and the largest in Quebec. The city is today an important center of commerce, finance, industry, technology, culture, world affairs and is the headquarters of the Montreal Exchange.

The Port of Montreal is one of the largest inland ports in the world handling 26 million tonnes of cargo annually. As one of the most important ports in Canada, it remains a trans-shipment point for grain, sugar, petroleum products, machinery, and consumer goods. For this reason, Montreal is the railway hub of Canada and has always been an extremely important rail city.

The video game industry has been booming in Montreal since 1997, coinciding with the opening of Ubisoft Montreal. Recently, the city has attracted world leading game developers and publisher’s studios such as Ubisoft Montreal, EA, Eidos Interactive, Bioware, Artificial Mind and Movement, Strategy First, THQ, Gameloft mainly because of the quality of local specialized labor, and tax credits offered to the corporations.

Montreal played an important role in the finance industry. The corporate headquarters of the Bank of Montreal and Royal Bank of Canada, two of the biggest banks in Canada, were in Montreal. While both banks moved their headquarters to Toronto, Ontario, their legal corporate offices remain in Montreal.

Quebec’s education system differs from Canada’s other provinces and territories. Between high school and university there is an additional college level called CEGEP meaning College of General and Vocational Education. It offers university preparatory courses and technical trade work specializations. Primary school, secondary school, and college add up to 13 years of pre-university study; one more than other provinces. For this reason, most undergraduate university degrees in Quebec universities are three years in length for Quebec students who have obtained a college diploma. Universities from outside Quebec have four-year Bachelor degree programs, because secondary study in all provinces outside of Quebec ends with grade 12 (rather than secondary study ending with grade 11 and then being followed by two years of college study, as in Quebec).

Quebec subsidises post-secondary education and controls tuition fees, resulting in low student costs in university education. There are three levels of tuition: Quebec resident (lowest level), Out-of-province Canadian resident (tuition set to average Canadian tuition) and International tuition (highest). The Quebec resident tuition is only available to residents of Quebec, residents of jurisdictions that have bilateral agreements with the Quebec government, and to students enrolled in French literature or Quebec studies programme.

There are four English universities, two French universities and twelve junior colleges in Montreal. The best known university in Montreal is McGill University. McGill consistently ranks in Canada’s top three and the world’s top 100 universities. It is one of Canada’s oldest schools, and known worldwide. English is the language of instruction at McGill. Concordia University is Montreal’s next largest and offers a range of Masters and Doctoral programs, with English as the primary language of instruction in most. Université de Montréal is the second largest research university in Canada, and home to the School of Engineering and School of Business. It also offers many programs for students interested in learning or improving their French language skills.

Public local transport, in Montreal, is served by a network of buses, subways, and commuter trains that extend across and off the island. The subway and bus system are operated by the Société de transport de Montréal (STM). The STM bus network consists of 197 daytime and 20 nighttime routes. STM bus routes serve 1,347,900 passengers on an average weekday in 2010.

The Metro was inaugurated in 1966 and has 68 stations on four lines. It is Canada's busiest subway system in total daily passenger usage, serving 1,050,800 passengers on an average weekday (as of Q1 2010).

Montreal has two international airports, one for passengers only, and the other for cargo. Montréal-Pierre Elliott Trudeau International Airport (also known as Dorval Airport) in the City of Dorval serves all commercial passenger traffic and is the headquarters of Air Canada and Air Transat. To the north of the city is Montréal-Mirabel International Airport in Mirabel, which was envisioned as Montreal's primary airport but which now serves cargo flights along with MEDEVACs and general aviation and some passenger services. In 2013, Montreal-Trudeau was the fourth busiest airport in Canada by passenger traffic and by aircraft movements, behind Toronto Pearson, Vancouver and Calgary, handling 14.09 million passengers in 2013, and 207,882 aircraft movements in 2011.