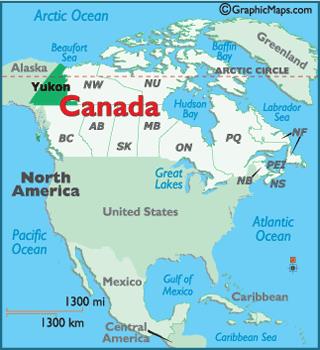 Yukon is the westernmost and smallest of Canada's three federal territories. Whitehorse is the territorial capital and Yukon's only city. The territory was split from the Northwest Territories in 1898. The Northwest Territories, Nunavut and Yukon contain one-third of Canada’s land mass but have a population of only 100,000. There are gold, lead, copper, diamond and zinc mines. Oil and gas deposits are being developed.

Long before the arrival of Europeans, Yukon was populated by First Nations people. The First Nations had extensive trading networks. European sudden rush into the area only began early in the 19th century with the fur trade, followed by missionaries and the Western Union Telegraph Expedition. Thousands of gold miners came to the territory during the Gold Rush of 1890s. This caused a population increase that justified the establishment of a police force. The government acquired the land from the Hudson's Bay Company in 1870 and split it from the Northwest Territories in 1898 to fill the need for local government created by the population influx of the gold rush.

The volcanic eruption of Mount Churchill in approximately 800 AD in the U.S. state of Alaska blanketed southern Yukon with a layer of ash.

Yukon is bordered by the Beaufort Sea on the northeast side, by Northwest Territories to the east, on the west and parts of the northwest side by the U.S. state of Alaska and on the south by the province of British Columbia. The territory is the approximate shape of a right triangle.

Most of the territory is in the watershed of the Yukon River. There are a large number of large, long and narrow glacier-fed alpine lakes in the southern Yukon, most of which flow into the Yukon River system. The larger lakes include Teslin Lake, Atlin Lake, Tagish Lake, Marsh Lake, Lake Laberge, Kusawa Lake and Kluane Lake. Bennett Lake on the Klondike Gold Rush trail is a lake flowing into Nares Lake, with the greater part of its area within Yukon.

Other watersheds include the Mackenzie River, the Peel Watershed and the Alsek–Tatshenshini, and a number of rivers flowing directly into the Beaufort Sea. The two main Yukon Rivers flowing into the Mackenzie in the Northwest Territories are the Liard River in the southeast and the Peel River and its tributaries in the northeast.

Notable widespread tree species within Yukon are the Black Spruce and White Spruce. Many trees are stunted because of the short growing season and severe climate.

Whitehorse is the capital of the territory, which is also the largest city, with about two-thirds of the population; the second largest is Dawson City with a population of 1,327, which was the capital until 1952.

Unlike most of Canada where the most extreme heat waves occur in July, August, and even September, The Yukon's extreme heat tends to occur in June and even May. The Yukon has recorded 36 °C three times in 1969, 1983 and 2004. 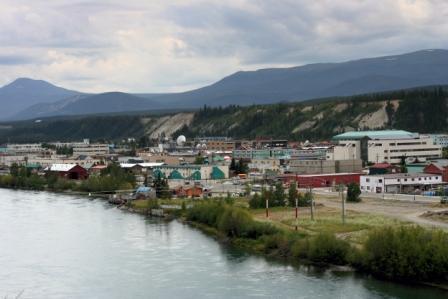 The Territory is officially bilingual (English and French). The most commonly reported mother tongue among the population was English at 28,065 (85%). The second-most common was 1,455 (4%) for French. Although English is the main language used in the territory, as evidenced by the census, the Government of Yukon recognizes several aboriginal languages as part of the cultural heritage of the territory: the Tlingit, and the less common Tahltan, as well as seven Athapaskan languages, Upper Tanana, Gwitchin, Hän, Northern Tutchone, Southern Tutchone, Kaska and Tagish, some of which are rare.

Manufacturing, including furniture, clothing, and handicrafts, follows in importance, along with hydroelectricity. The traditional industries of trapping and fishing have declined. Today, the government sector is by far the biggest employer in the territory, directly employing approximately 5,000 out of a labor force of 12,500.

Yukon's tourism motto is "Larger than life". Yukon's major appeal is its nearly fresh nature. Tourism relies heavily on this, and there are many organized outfitters and guides available to hunters and anglers and nature lovers of all sorts. Sports enthusiasts can paddle lakes and rivers with canoes and kayaks, ride or walk trails, ski or snowboard in an organized setting or access the backcountry by air or snowmobile, climb the highest peaks in Canada or take a family hike up smaller mountains, or try ice climbing and dog sledding.

Yukon also has a wide array of cultural and sporting events and infrastructures that attract artists, participants and tourists from all parts of the world; Yukon International Storytelling Festival, Frostbite Music Festival, Dawson Music Festival and Yukon Quest.

There are many opportunities to experience pre-colonial lifestyles by learning about Yukon's First Nations. Wildlife and nature observation is exceptional and a wide variety of large mammals, birds, and fish are easily accessible, whether or not within Yukon's many territorial parks and national parks and reserves, or nearby Liard River Hot Springs Provincial Park in British Columbia. The latitude enables the view of aurora borealis in Yukon.

In the 19th century, Yukon was a segment of North-Western Territory that was administered by the Hudson's Bay Company, and then of the Northwest Territories administered by the federal Canadian government. It only obtained a recognizable local government in 1895 when it became a separate district of the Northwest Territories. In 1898, it was made a separate territory with its own commissioner and an appointed Territorial Council.

In preparation for responsible government, political parties were organized and ran candidates to the Yukon Legislative Assembly for the first time in 1978. The Progressive Conservatives won these elections and formed the first party government of Yukon in January 1979. The Yukon New Democratic Party (NDP) formed the government from 1985 to 1992 and the conservatives returned to power in 1992.

The Yukon Act, passed on April 1, 2003, formalized the powers of the Yukon government and devolved additional powers to the territorial government.

Although there has been discussion in the past about Yukon becoming Canada's 11th province, it is generally felt that its population base is too sparse for this to occur at present.