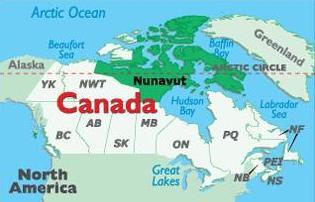 Nunavut is the largest, northernmost and newest territory of Canada. The creation of Nunavut resulted in the first major change to Canada's political map since the incorporation of the new province of Newfoundland and Labrador in 1949.

Nunavut encompasses a major portion of Northern Canada, and most of the Canadian Arctic Archipelago. Its vast territory makes it the fifth-largest country subdivision in the world, as well as the second-largest in North America after Greenland. The capital Iqaluit on Baffin Island, in the east, was chosen in 1995 by a capital referendum. Other major communities include the regional centers of Rankin Inlet and Cambridge Bay. Nunavut also includes Ellesmere Island to the far north, as well as the eastern and southern portions of Victoria Island in the west and Akimiski Island in James Bay to the far south. It is the only geo-political region of Canada that is not connected to the rest of North America by highway.

Nunavut is both the least populous and the largest in area of the provinces and territories of Canada. It has a population of 31,906, mostly Inuit, spread over a land area the size of Western Europe. Nunavut is also home to the northernmost permanently inhabited place in the world, Alert. Nunavut means "our land" in Inuktitut.

Iqaluit is the largest city and territorial capital of the Canadian territory of Nunavut.

Nunavut has supported a continuous aboriginal population for approximately 4,000 years. The first European contact with Nunavut happened by an English explorer, Martin Frobisher, in 1576. He had discovered gold ore around the Frobisher Bay on the coast of Baffin Island.

It was separated officially from the Northwest Territories on April 1, 1999, via the Nunavut Act and the Nunavut Land Claims Agreement Act, though the boundaries had been contemplatively drawn in 1993 by nearly 85% of the voters.

Iqaluit was founded in 1942 as an American air base, intended to provide a stop-over and refueling site for short range aircraft being ferried across the Atlantic to support the war effort in Europe. Iqaluit's first permanent inhabitant was Nakasuk, an Inuk guide who helped American Air Force planners to choose a site with a large flat area suitable for a landing strip.

Iqaluit was officially called Frobisher Bay until 1987, after the name of the bay on whose shore it is sited.

Geography and Climate of Nunavut

The total area is 2,038,722, 1,877,787 km2 of which is land and 160,935 km2 is water in Northern Canada. The territory consists of the mainland, most of the Arctic Archipelago, and all of the islands in Hudson Bay, James Bay, and Ungava Bay (including the Belcher Islands), which belonged to the Northwest Territories. This makes it the fifth largest subnational entity in the world. If Nunavut were a country, it would rank 15th in area.

Nunavut has land borders with the Northwest Territories on several islands as well as the mainland, Manitoba to the south of the Nunavut mainland, Saskatchewan to the southwest, and a small land border with Newfoundland and Labrador on Killiniq Island. It also shares maritime borders with Greenland and the provinces of Quebec, Ontario, and Manitoba.

Nunavut's highest point is Barbeau Peak (2,616 m) on Ellesmere Island. It is one of the lowest populated regions in the world. By comparison, Greenland has approximately the same area and nearly twice the population. Iqaluit, as the capital of the Canadian territory of Nunavut, is located on the south coast of Baffin Island at the head of Frobisher Bay.

Nunavut experiences a polar climate in most regions, due to its high latitude.

Iqaluit has a typically Arctic climate, although it is well outside the Arctic Circle. The city has cold winters and short summers that are too cool to permit the growth of trees.

Along with the Inuit language, English and French are also official languages in Nunavut.

The current and only mine in production in 2013 is Agnico-Eagle Mines Ltd - Meadowbank Division. Meadowbank is an open pit gold mine with an estimated mine life 2010-2018 and employs 678 persons. Cost to produce an ounce of gold is $913. The north holds vast reserves of coal, oil, and gas is being looked at to move into production.

There are no universities in Nunavut. Nunavut Arctic College is the only institution of higher education. It offers a small number of degrees in conjunction with Dalhousie University - Nunavut Nursing Program, University of Regina - Nunavut Teacher Education, University of Prince Edward Island - Master of Education in Leadership and Learning program, and the former Akitsiraq Law Program, recently and unexpectedly disabled by the territorial government, given its widely acknowledged successes and accolades.

Nunavut has a Commissioner appointed by the federal Minister of Indian Affairs and Northern Development. As in the other territories, the commissioner's role is symbolic and is analogous to a Lieutenant-Governor. While the Commissioner is not formally a representative of Canada's head of state, a role roughly analogous to representing The Crown has accrued to the position.

Nunavut elects a single member of the Canadian House of Commons. This makes Nunavut the largest parliamentary riding in the world by area.